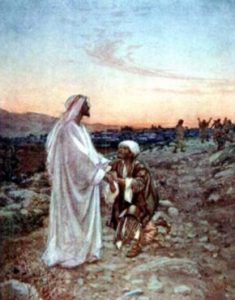 …and he was clean of his leprosy. Today’s first reading gives us the end of the story of Naaman’s cure from leprosy. The part that we don’t hear about is how Naaman was the commander of the army for the king of Aram. The Aramean king sent a letter to the King of Israel, requesting that Naaman be cured of his leprosy. The king of Israel, not seeing how possibly he could cure Naaman, thought that the Aramean king was looking for trouble. Thus, Elisha the prophet intervenes, instructing Naaman to plunge seven times in the waters of the Jordan. Naaman actually gets mad about this request, thinking that the waters of the rivers in his own land are just as good – but his servants reason with him to go ahead and do it. The result is more than the miraculous cure of his leprosy, but a change of heart – the conversion from arrogance to humility. After being cured, when Naaman catches up with Elisha, he makes this statement of faith. Now I know that there is no God in all the earth, except in Israel.

Similarly, today’s gospel ends with Jesus telling the one leper who was a Samaritan, that came back to thank Jesus: Stand up and go; your faith has saved you. All ten lepers cried out in faith to Jesus: “Jesus, Master! Have pity on us!” Only the Samaritan recognizes the work of God in his cure – and he returns to Jesus with even greater faith.…glorifying God in a loud voice; and he fell at the feet of Jesus and thanked him. His thanksgiving is a statement of faith. Leprosy had isolated the Samaritan man from his family and community. The Samaritan is restored both physically and socially. We also see his spiritual transformation.

Scripture scholars see leprosy as a metaphor for our sinfulness. When we call out to God for mercy, with a contrite heart, He heals us in the sacrament of reconciliation. We thank Jesus for this great gift of His mercy!