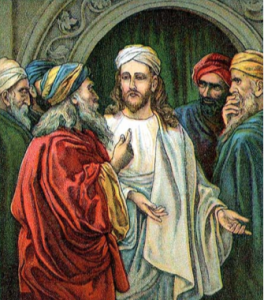 The Pharisees went off and plotted how they might entrap Jesus in speech. They sent their disciples to him, with the Herodians…. The Herodians were members of King Herod’s party. They were strong supporters of Rome’s right to tax the Jewish people. Pharisees opposed the tax, but paid it to avoid confrontation with the Roman leadership. Is it lawful to pay the census tax to Caesar or not? This question was designed to get Jesus into deep trouble. If Jesus said it was lawful to pay the tax, the Jewish people would be angry with him, for siding with the Romans. On the other hand, if Jesus said that is was not lawful to pay the tax, he could be turned into the Romans as a rebel, someone against the emperor.

At our Baptism, the image of God was engraved on our soul. We are like a freshly minted new coin…. But then what happens? The image becomes dirtied and worn down by sin. Confession restores the image of God on our soul. St. Augustine wrote: ”Just as a coin if it’s rubbed with earth, loses the emperor’s image, so the human mind, if it’s rubbed with earthly lusts, loses God’s image. However, along comes Christ the master of the mint, to strike the coins afresh. And how does he strike the coins afresh? By pardoning sins with grace; and he will show you that God is looking for his image.”

Let’s pray our Psalm response: “Give the Lord glory and honor”.

May God bless us all always!
Deacon Mike