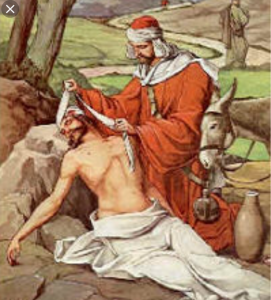 He approached the victim, poured oil and wine over his wounds and bandaged him.

Let’s first try to view this story through the eyes of those that listened to Jesus. The setting is an actual road between Jerusalem and Jericho. The road winds down through rocky cliffs. These cliffs made good hiding places for thieves and outlaws to hide and attack unsuspecting travelers. The people of Jesus’s time would have known or experienced firsthand the dangers along this road.
A priest happened to be going down that road, but when he saw him, he passed by on the opposite side. We ask ourselves, why didn’t the priest stop? The priest was probably going to Jerusalem to worship at the temple. If the beaten man had died, the priest would be ritually unclean in touching a dead person – banning him from the Temple for a period of time.
Likewise a Levite came to the place, and when he saw him, he passed by on the opposite side. Why did the Levite pass by the victim? We don’t know. Perhaps he thought the beaten man was pretending to be injured and would attack him.
But a Samaritan traveler who came upon him was moved with compassion at the sight. The Samaritan was moved from compassion to action, taking care of the man’s wounds, paying for his lodging and care while he was recovering. The Jewish people of Jesus’s time saw

Samaritans as heretics. When Samaria was conquered in 722 BC by Assyria, the survivors intermarried with the Assyrians. Thus, Samaritans were banned from the Temple in Jerusalem and even synagogues. The Samaritans were just as hostile to the Jews, refusing to allow them to pass through their town. So when Jesus uses this story to teach the scholar of the law (lawyer) about who our neighbor is… it must have been quite a shock. “Which of these three, in your opinion, was neighbor to the robber’s victim?” He answered, “The one who treated him with mercy.” Jesus said to him, “Go and do likewise.”
Moses taught in the first reading that the God’s law is very near, already in your mouths and in your hearts; you have to carry it out. God’s law of love is designed for us to inherit eternal life – which was the question that the scholar of the law asked. The Good Samaritan in loving his neighbor was moved into action. May our love for our neighbor also move us into action.

God bless us all always!