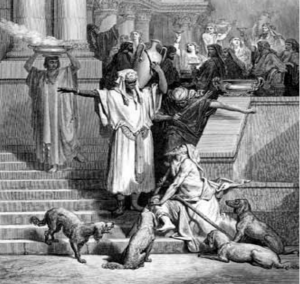 In the Magnificat prayer (Lk1:46-55), Mary prays: He has deposed the mighty from their thrones and raised the lowly to high places. The hungry he has given every good thing, while the rich he as sent empty away. Today’s parable of the rich man and Lazarus is another illustration of how God reverses the situations of the rich and the poor, as well as the the mighty and the lowly.
The sin of the rich man was not in what he did to Lazarus, but what he failed to do. The rich man did not shout at or physically abuse Lazarus or had him arrested for trespassing. The sin of rich man was not in being rich, but in failing to use his riches to help people in need, like Lazarus, right at his front door! We remember Jesus words that whatever we do to the least of the brothers and sisters, we do unto Him.
The prophet Amos also speaks about the complacency that could occur with riches and the result… Woe to the complacent in Zion! Lying upon beds of ivory, stretched comfortably on their couches, they eat lambs taken from the flock…drink wine from bowls and annoint themselves with the best of oils…now they shall be the first to go into exile… The prophet Amos lived at a time when Israel was thriving – economically, politically and militarily. The wealthy were living in extravagance, while the poor suffered. What were the consequences? The failure of the wealthy Israelities to help the poor would be the downfall of the nation.
We must steer clear of the temptation to ignore those in need, especially those at our “front door”, i.e. in our neighborhood, parish, community etc. St. Paul in today’s reading from the first Letter to Timothy tells us how: But you, man of God, pursue righteousness, devotion, faith, love, patience and gentleness.
Let us remember that the “poor” can also be those who don’t know Jesus Christ, i.e. poor in love. Jesus has given us abundant love and mercy. May we share His love with all, especially those in need. Let’s start by doing so, one person at a time!

God bless us all always!